A Stanford Student Mocked the Federalist Society. It Jeopardized His Graduation. 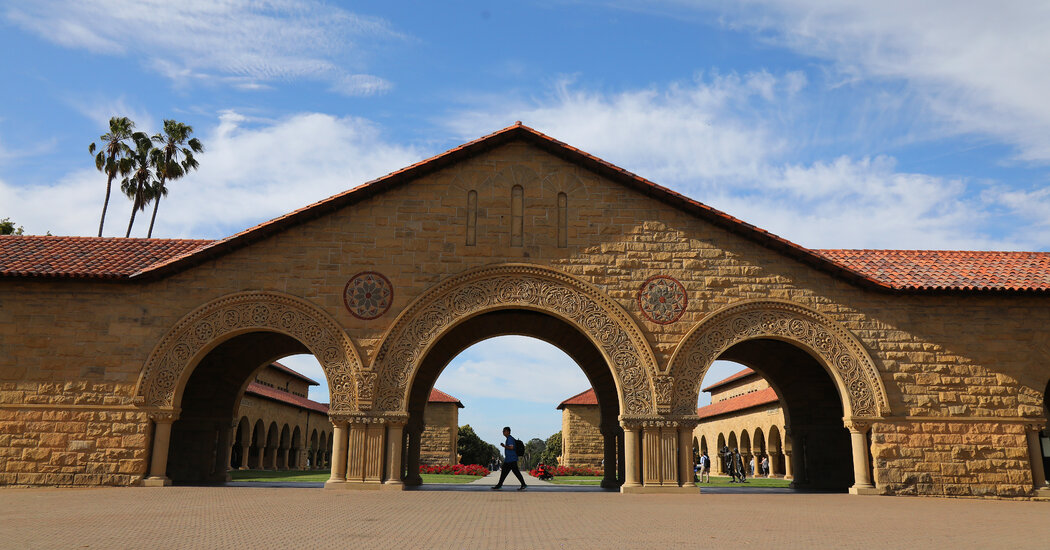 It was the final day of classes at Stanford Law School, May 27, when Nicholas Wallace said he was blindsided by a message from one of the deans informing him that his graduation was in jeopardy for potential misconduct.

His offense: sending an email flier to fellow law students in January that he pretended was from the Federalist Society, a prominent conservative and libertarian group with a chapter at the law school.

The satirical flier promoted a discussion about the Jan. 6 insurrection at the U.S. Capitol, featuring Senator Josh Hawley, Republican of Missouri, and the Texas attorney general, Ken Paxton. The title of the mock event: “The Originalist Case for Inciting Insurrection.”

The chapter’s leaders were not amused. They filed a complaint on March 27 with the university, which said in a message to Mr. Wallace that it wasn’t until May 22 that the complainants had asked the administration to pursue the matter.

“I was astounded,” Mr. Wallace, 32, said in an interview on Wednesday. “I couldn’t believe that without any more than this letter of concern they placed my graduation and everything I’ve worked for for the last three years, they’ve placed that under threat.”

Mr. Wallace’s predicament drew national attention from both free speech groups and conservatives. It served as another example of the intense debate over political speech on college campuses in America.

In response to questions on Wednesday, a spokesman for Stanford University said in an email that Mr. Wallace would be allowed to graduate after all after administrators consulted with the university’s legal counsel, who concluded the matter involved issues of protected speech.

“In cases where the complaint is filed in proximity to graduation, our normal procedure includes placing a graduation diploma hold on the respondent,” said the spokesman, E.J. Miranda. “The complaint was resolved as expeditiously as possible, and the respondent and complainant have been informed that case law supports that the email is protected speech.”

Mr. Miranda said that the university would also review its procedures for placing holds on student diplomas in judicial cases close to graduation.

The president of the campus chapter of the Federalist Society did not respond to a request for comment on Wednesday night.

Mr. Hawley, who received his undergraduate degree from Stanford University, was widely criticized for objecting to the certification of the presidential election results. Mr. Paxton has drawn scrutiny for his appearance at a rally in support of Donald J. Trump in Washington on the day of the siege.

Representatives for Mr. Hawley and Mr. Paxton did not immediately respond to requests for comment on Wednesday night.

Grabbing attention itself was Mr. Wallace’s satirical flier, which he said he had emailed to a Listserv forum for law school students on Jan. 25, nearly three weeks after the deadly riot at the U.S. Capitol.

The flier said that the event was being presented by the Federalist Society on Jan. 6.

“Riot information will be emailed the morning of the event,” the flier said, offering Grubhub coupons to the first 30 students who R.S.V.P.’d for the fictitious program. “Although widely believed to conflict in every way with the rule of law, violent insurrection can be an effective approach to upholding the principle of limited government.”

Two days after the satirical flier was sent by Mr. Wallace, it was the focus of a fact check article by USA Today, which reported that the email was a form of satire.

In a complaint to the university, unidentified officers of the Federalist Society chapter said that Mr. Wallace’s email had caused significant harm and had led other organizations to cancel their events with the group.

“Wallace defamed the student group, its officers, Senator Josh Hawley, and Texas Attorney General Ken Paxton,” the complaint said. “Wallace, impersonating the Stanford Federalist Society, wrote on the flyer that ‘Riot information will be emailed the morning of the event,’ insinuating that the student group was encouraging and hosting a riot. He also wrote that Attorney General Paxton advocates for ‘overturn[ing] the results of a free and fair election’ by ‘calling on a violent mob to storm the Capitol.’ And he wrote that Senator Hawley believes that violent insurrections are justified.”

The names of the complainants were redacted from the complaint, which was posted online on Monday by the Foundation for Individual Rights in Education, a group working to defend free speech on college campuses. Mr. Wallace had sought the group’s help.

“By instituting an investigation and placing a hold on Wallace’s degree days before his graduation, Stanford betrays its legal and moral commitments to respect its students’ expressive rights,” the group said in a letter on Tuesday to one of the law school’s deans.

The flap drew the notice of Slate magazine. The writer of that article, Mark Joseph Stern, was the featured speaker in a conversation about the Federalist Society that Mr. Wallace said he had organized about a month after he sent the satirical email.

Mr. Wallace’s cause was also taken up by Laurence H. Tribe, a constitutional law professor emeritus at Harvard University.

“Mocking an ideologically-based group can’t be made a basis for denying academic privileges in any open society worthy of respect,” Mr. Tribe wrote on Twitter. “If accurate, this report shows Stanford Law School to be unworthy of treatment as an academic institution.”

George T. Conway III, one of the founders of the anti-Trump group the Lincoln Project, also rallied behind Mr. Wallace.

“As someone who been involved with the Federalist Society for over 35 years, I agree that this is totally ridiculous,” Mr. Conway said on Twitter, responding to Mr. Tribe.

Mr. Wallace, who is from Ann Arbor, Mich., and received his undergraduate degree from the University of Washington in Seattle, said that he is supposed to take the bar exam this summer in his home state and then start a job with the Federal Energy Regulatory Commission in Washington, D.C.

He said that he would not have been able to take the bar exam without his law school diploma, which he will receive on June 12.