A Serene Shore Resort, Except for the SpaceX ‘Ball of Fire’ 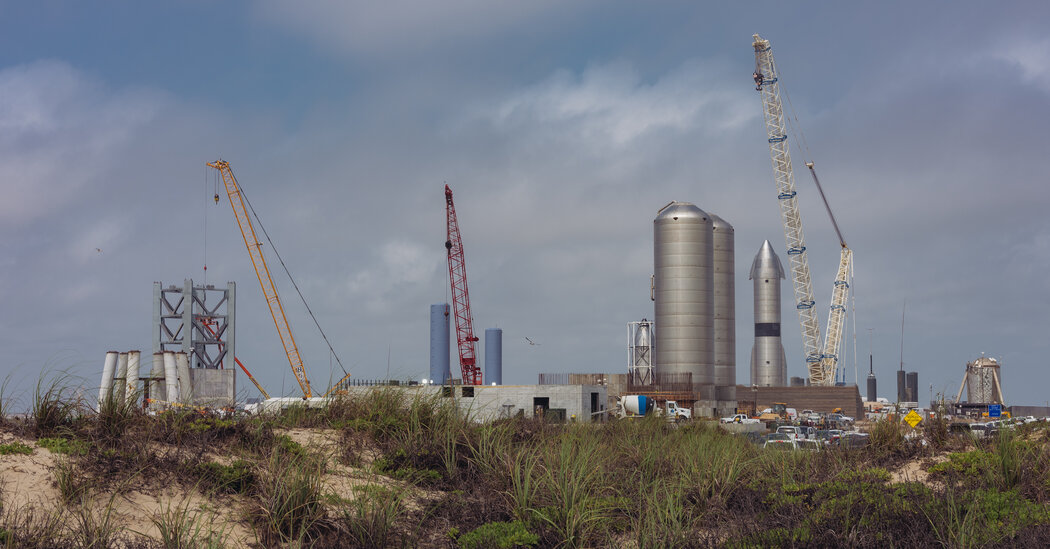 BOCA CHICA, Texas — The text arrived late at night: For your own safety, leave home by morning, it read. Nancy and James Crawford, no longer surprised but still unsettled, raced away in their S.U.V. after sunrise, occasionally twisting their necks to catch a glimpse of the space rocket towering behind them.

Moments later, the Crawfords, who are in their 70s, watched from a 12th-floor balcony on South Padre Island, a few miles up the coast, as the rocket shattered on impact during an attempted landing, spreading fiery debris along the sand dunes and tidal flats. The building shook, Mr. Crawford recalled, and in the distance, there was “a ball of fire.”

“It was exciting,” echoed his wife, “but too dangerous if we had stayed home.”

Home for the Crawfords is a remote coastal community a stone’s throw from Mexico, a village so small that water has to be trucked in. With a single road in that ends at the shoreline, it has long attracted people eager to escape congested cities, and retirees eager to escape the harsh winters of the North and Midwest.

From the community tucked among lush wetlands, wildlife refuges and sandy beaches, the nearest supermarket is about 20 miles away, past long stretches of gravel roads and a Border Patrol checkpoint. Until a few years ago, the handful of residents could not have imagined that rockets designed for interplanetary travel would be as much a part of their view as the Rio Grande.

But ever since the billionaire Elon Musk brought his private space company, SpaceX, to the area, life has not been the same. A gargantuan gray rocket, surrounded by chain-link fencing less than a mile from the ranch-style brick homes, is a constant reminder that the Crawfords and their remaining neighbors live near a space launching pad.

SpaceX representatives usually give the 10 or so residents plenty of warning that a rocket is scheduled for launching. Other times, loud sirens warn them, and some, like the Crawfords, choose to put on heavy-duty headphones to block some of the noise. When a rocket engine is tested, the roar and trembling are so powerful that they can blow windows inward.

Humans are not the only species who cower. The earsplitting sound of rockets shrieking above the tidal flats has caused some, such as shorebirds, to flee in terror or to stop nesting in the area altogether. And heavy machinery brought in to retrieve whatever debris has scattered often damages the road and scares away other wildlife, environmentalists said.

While the Federal Aviation Administration has given SpaceX environmental clearance for the tests, environmentalists worry that recent explosions could have a lasting effect on the ecologically rich area, home to a number of endangered species, like ocelots and Kemp’s ridley sea turtles.

“When you’re testing brand-new technology and brand-new rockets, brand-new engines, stuff like that happens,” said Jim Chapman, president of Friends of the Wildlife Corridor, a nonprofit group with a mission to protect the native habitats of the Rio Grande Valley. “Well, our feeling is, that shouldn’t be happening here.”

But the story of how SpaceX came to Boca Chica, about 22 miles from Brownsville, Texas, begins with a promise of a much-needed economic boost to one of the poorest regions in the country.

For decades, Brownsville and the broader Rio Grande Valley have struggled with a lack of opportunities and a brain drain, with many college graduates opting to leave for careers elsewhere.

Before SpaceX became entrenched in Brownsville’s consciousness, the local economy had relied heavily on jobs with the government, schools, health care and some low-paying retail stores, officials said.

Representatives for SpaceX, which is investing a fortune in its quest to send people to Mars, did not respond to a request for comment. But officials of Cameron County, which includes Boca Chica, said the company had infused hope and optimism into the region.

When the company announced plans to move to the area in 2014, it promised to create about 500 local jobs, said Eddie Treviño Jr., the Cameron County judge, the county’s top elected official. But as of late last year, he said, the actual figure was more than triple that, with more than 1,600 jobs in construction, clerical and other fields, most of them given to local residents, he said.

The benefits to the Brownsville area, where according to the U.S. Census Bureau at least 30 percent of the population lives in poverty, will eventually outweigh whatever tension and disruptions the company has brought, Mr. Treviño said.

“We have to balance the good with the bad,” he said.

Won’t You Be My Neighbor?

The search for the ideal SpaceX launching pad began more than 10 years ago. Sites were considered in other states, including Georgia, California and Alaska, but engineers needed a mostly desolate area close to the ocean. Boca Chica, a retirement community with only a few year-round residents, fit the bill.

After SpaceX signed a deal to set up operations near the village, the testing of rockets that would one day reach outer space began a few years later in earnest, Mr. Treviño said. The company has taken a fail-fast, fix-fast approach, which essentially means that engineers use the tests to identify shortcomings in the design and then make adjustments before the next test.

Over the past year, those who still live in the community have had to flee before every launch. Four rockets have exploded, spreading debris across the area. (The most recent test, this month, did not result in an explosion, and an elated Mr. Musk took to Twitter to celebrate the milestone: “Starship landing nominal!”)

This was not the Crawfords’ idea of a peaceful retirement. Both worked in government jobs in Michigan, him in law enforcement and her with a deeds department. And though they still spend their summers in Michigan, they bought their home in Boca Chica 10 years ago in search of nature and some quiet.

Then came the knocks on their door, and on the doors of their neighbors. SpaceX wanted their homes. Representatives with the space giant had appraised the Crawfords’ single-story, three-bedroom brick house at $50,000 and was willing to pay “three times” that, they were told. The Crawfords dismissed what they considered to be a paltry offer from one of the richest men in the world.

“We can’t buy a new house with that money,” Mr. Crawford said with a chuckle.

“We are pretty certain that we will be able to remain in our home,” Ms. Crawford said with a sigh of relief.

But many of their neighbors, who like them once found Boca Chica the perfect winter oasis, took the checks and left.

And one by one, the ranch homes have been replaced by modern white houses with solar-powered rooftops, the occupants younger space professionals who work for SpaceX, local residents said.

“You can tell which homes are SpaceX because they are the ones that look the same, a stale white and black,” said Rosemary Workman, 72, who spends most of the year in Boca Chica and has turned down offers to sell her home.

One of her new neighbors has stood out. Mr. Musk has been spotted staying in an unassuming ranch-style house. Ms. Workman and her neighbors sometimes see him taking a stroll with two men they assume are part of his security detail.

“He doesn’t really make an effort to say hi or get to know us,” said Jim Workman, 75, who lives across the street from the billionaire.

The feeling, he admitted, is mutual. He pointed to a flag on his front porch that reads “Come and Take It” below the image of a cannon, the flag fashioned for the Texas Revolution and long a symbol of defiance in the state.

“I think he gets the message,” Mr. Workman said.

In downtown Brownsville, Elias Cantu, an activist with the League of United Latin American Citizens, or LULAC, the oldest Mexican-American civil rights organization in the country, stood beside a mural of Mr. Musk that read “Boca Chica to Mars” and shrugged. He said he feared it would be only a matter of time before Boca Chica’s extreme redevelopment found itself encroaching into Brownsville’s poorest neighborhoods.

“It’s inevitable,” Mr. Cantu said. “He’ll need homes to house all the people he wants to bring down here. I’m afraid he’s going to push out a lot of low-income families who have lived here for generations.”

Xandra Treviño, a member of Fuera SpaceX, an organization pushing back on SpaceX’s rapid expansion (its name translates as Leave SpaceX), said she and many other activists felt ignored by area policymakers.

But area officials said they could not turn away millions of dollars in local investments and the promise of high-paying jobs in a region that for decades has been starved for investment.

In the “build it and they will come” philosophy, the space giant has already attracted other employers to the region. Space Channel, an entertainment network devoted to covering space, recently announced that it would move part of its operations from Los Angeles to Brownsville, including six executives, with local positions to follow. Other companies are likely to do the same, said Rose Gowen, who sits on the city commission.

“One of the very important things for me to support, and us to support, is growing the wealth,” said Ms. Gowen.

Mr. Musk seems to agree. He recently announced on Twitter that he planned to donate $30 million for city revitalization projects and schools. The mayor of Brownsville, Trey Mendez, did not respond to a request for an interview. But in a statement, he said he supported money coming in. “We look forward to a discussion about how this could help our community prosper as we take a front seat to the next chapter of space exploration and innovation,” he said.

But that growth is no consolation for the holdout residents of Boca Chica. The Crawfords like to sit in their backyard and admire the several species of birds looking for respite, or the delightful sightings of those migrating.

But reminders that they live near a launchpad are never far away. Every now and then, loud sirens startle them, signaling that the testing of rocket engines is about to begin. Or they receive a text asking them to leave their home, a cue that a launch is imminent.

When a local sheriff’s vehicle drives by with its sirens on, the Crawfords know they are supposed to run to the street or at least leave their home. They know their windows could shatter. But the last time they heard the siren, on one afternoon this spring, the couple looked at each other and shrugged.

“We grew tired of running out,” Ms. Crawford said. This is life near SpaceX, after all.