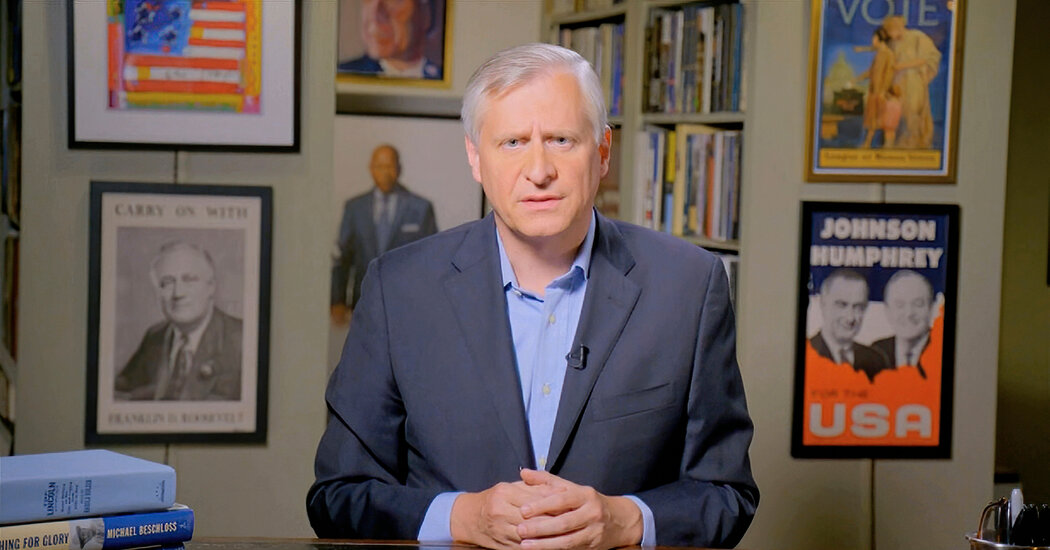 Last month, the historian and biographer Jon Meacham got an unusual request from Joseph R. Biden Jr.’s campaign. The campaign wanted him to speak at the Democratic National Convention — not to endorse Mr. Biden, but to put the stakes of this election in historical context.

“The request was, define the soul of America, and do it quick,” Mr. Meacham said.

Mr. Meacham is not a Democrat. He has voted for candidates of both parties, and his work has focused his attention on studying past presidents rather than endorsing modern-day ones. When he gave his four-minute address Thursday evening from his home in Nashville, he sat in his library with two portraits mounted behind him: one of Representative John Lewis and one of former President George Bush, painted by his son former President George W. Bush.

It was a rare, high-profile appearance in the political arena for a Pulitzer Prize-winning author. Mr. Meacham has spent much of his career steeped in the country’s past, studying the lives of presidents such as Thomas Jefferson, Andrew Jackson and Franklin D. Roosevelt.

His speech also marked a public moment in a long-running friendship with Mr. Biden, with whom he has had periodic, spirited conversations about American history and how the country’s sometimes-troubled past shapes the present and future.

Some of the themes that emerged during their discussions — particularly the notion that there is a “battle for the soul of this nation,” as Mr. Biden has said, and that some of the darkest chapters of American history have been followed by social progress and a spirit of civic responsibility — became central messages during this week’s Democratic convention.

In addition to giving his own remarks, Mr. Meacham was involved in discussions about the themes in Mr. Biden’s acceptance speech.

Mr. Meacham and Mr. Biden got to know each other around 15 years ago, when Mr. Biden told Mr. Meacham how much he enjoyed his book “American Gospel,” about the founding fathers’ views on the role of faith in politics and public life. Mr. Biden had studied it in detail, printing out passages and laminating them, so he could have them on hand when he was campaigning with Barack Obama in 2008.

In 2017, when Mr. Biden published “Promise Me, Dad,” his book about his son Beau Biden, he asked Mr. Meacham to appear with him at an event in Nashville, where Mr. Meacham interviewed the former vice president in front of a packed audience.

The following year, Mr. Meacham published “The Soul of America,” about the history of racial, ideological and partisan strife in the United States, and how the nation has been united by a belief in progress even in the most turbulent and divisive eras. The book resonated with Mr. Biden, who called Mr. Meacham and read aloud passages that he was eager to discuss.

“It was an author’s dream,” Mr. Meacham said.

Mr. Biden was especially struck by an image in the book of a 1925 Ku Klux Klan march in Washington, which he connected to the 2017 white nationalist rally in Charlottesville, Va.

“I remember saying to him that the moment may in fact be less about Trump himself than it is about us, because Trump is an exacerbation of all too perennial forces in our character that either ebb or flow,” Mr. Meacham said.

In February 2019, a few months before Mr. Biden declared his candidacy, the two of them met in Delaware, where they appeared together at the University of Delaware to discuss “The Soul of America” and to celebrate the naming of the Joseph R. Biden Jr. School of Public Policy and Administration. Over coffee before the event, they had another lengthy conversation about the themes in Mr. Meacham’s book.

“He’s very interested in, how does the country come out of a crisis stronger and not weaker?” Mr. Meacham said. “He wants to know, what does history tell us about American renewal?”

“Meacham has been on the same wavelength as him, not only about the moment in history that we’re in but how we get out of it,” said Bill Russo, deputy communications director for the Biden campaign.

Since he declared his candidacy, Mr. Biden has repeatedly spoken about how the country’s soul and character are at stake in this election. His thinking has been influenced by conversations with Mr. Meacham and others about the events in Charlottesville.

“The historic seriousness of what the country is facing is a huge piece of what we have talked about in the campaign,” said TJ Ducklo, the campaign’s national press secretary. “We felt it was important to have a historian like Jon Meacham to put all of this perspective. This is a moment of crisis in our country’s history.”

Born in Chattanooga, Tenn., in 1969, Mr. Meacham describes himself as a “white Southern boring Episcopalian.” After studying at University of the South in Sewanee, he became an editor at Random House, where he published books by Al Gore, John Danforth, Clara Bingham and Mary Soames, and he was the editor of Newsweek from 2006 to 2010. He has published 10 books, including his forthcoming one about Mr. Lewis, “His Truth Is Marching On.”

Friends and colleagues say it is unlike Mr. Meacham to take such a public stance in a contentious election and to throw his weight behind a particular party and candidate.

“Jon has never been a political activist,” said the historian Michael Beschloss. “It has taken a lot to get him from the spectators’ section onto the field.”

It is not unprecedented for a historian to play an advisory role on a campaign or in an administration. The 19th-century historian George Bancroft, who has been called the “father of American history,” was closely aligned with President James K. Polk. Another prominent historian, Arthur M. Schlesinger Jr., was outspokenly partisan, and even served in the Kennedy White House.

Until now, Mr. Meacham has avoided any whiff of partisanship in his work. While he delivered eulogies at the funerals of George Bush and the former first lady Barbara Bush, he has never before spoken at a political rally or convention. He agreed to speak this week because he felt it was important to make an argument informed by history for why the country needs new leadership.

“It’s just a sign of the grim moment we’re in that a basic statement about the capacity of America to reform itself can even seem partisan,” he said.