A Parasitic Wasp Unmasked: One Species Is Actually 16 Species 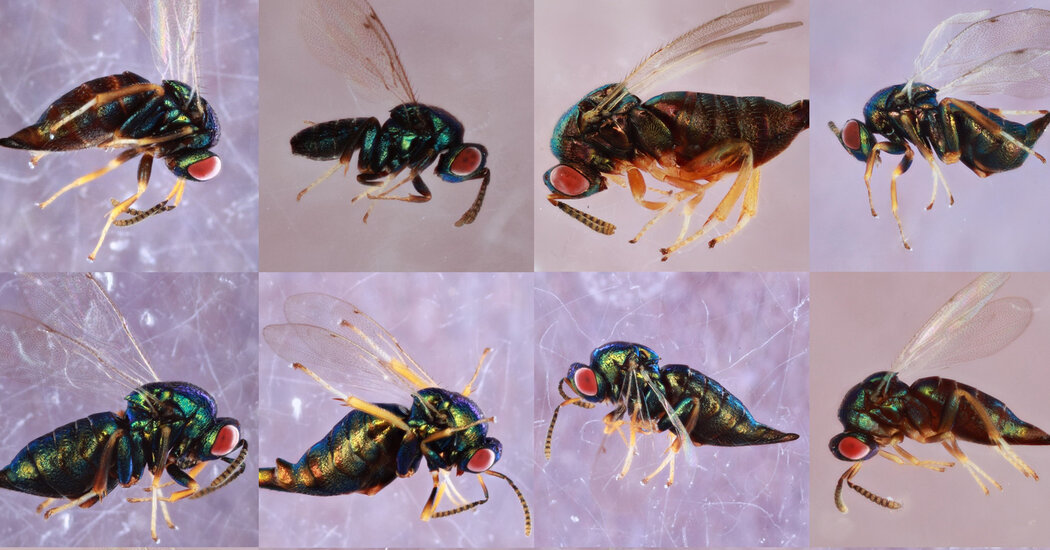 The tiny, iridescent Ormyrus labotus always seemed suspicious for a parasitoid wasp. It wasn’t the wasp’s striking beauty — wasps can be conventionally attractive, too — but its life strategy. Parasitoid wasps lay their eggs on or inside other insects and arthropods, and the larvae eat their way out when they hatch. Each parasitoid wasp species tends to prefer one or a few hosts. But Ormyrus labotus had been observed laying its eggs in more than 65 different species of insects — far more than one or a few.

Ormyrus labotus parasitizes gall wasps, which lay their eggs on plants and induce them to form protective, swollen structures called galls around the larvae (a parasite, in a parasite!). When galls from different wasp species form, they take on a variety of sizes and shapes. Some are much tougher than others, some have unusual defensive strategies. There are galls that are chambered, secrete nectar or bristle with fibers. Parasitoid wasps often have specialized adaptations that allow them to broach certain kinds of gall.

But Ormyrus labotus, it seemed, had no problem penetrating an assortment of galls: lime-green and polka-dot round galls, spiky yellow galls on the blade of a leaf and stubbly galls on a twig. “It seemed weird that one species could be sort of effectively attacking all of these different galls,” said Sofia Sheikh, a doctoral student at the University of Chicago who did research on the wasps when she was at the University of Iowa.

It turns out that entomologists had good reasons to be suspicious. After extracting DNA samples from parasitoid wasps collected from oak trees around the country, Ms. Sheikh and colleagues at the University of Iowa have revealed that Ormyrus labotus is actually a complex of at least 16 genetically distinct species that, essentially, are indistinguishable to the eye. Their research was published Wednesday in the journal Insect Systematics and Diversity.

The paper, the researchers note, is the latest in a string of studies unmasking supposedly generalist parasitic insect species as complexes of many species. And the scientists are certain more of this hidden diversity lurks in insects that have not been studied for decades — there may be even more species of Ormyrus labotus.

These examples are teaching scientists to “be suspicious” of any parasitic wasp species believed to be generalists, said Josephine Rodriguez, an entomologist at the University of Virginia’s College at Wise, who was not involved with the research.

The paper emerged out of a larger project studying the co-evolution of North American gall wasps and their parasites, said Andrew Forbes, an evolutionary biologist at the University of Iowa. “Nobody has looked at these groups for 50 to 100 years,” said Miles Zhang, a research entomologist at the USDA Systematic Entomology Lab, adding that much of the work on gall wasps was completed by the biologist Alfred Kinsey, who is much better known for his namesake human sexuality scale.

Ms. Sheikh and Anna Ward, a graduate student at Iowa, spent several years plucking galls from oak trees, which involved scouring iNaturalist, a social network of biologists and other scientists, and inviting themselves into people’s backyards. They brought the galls back to the lab, placed them in separate cups in a refrigerator-size incubator, and waited to see if the gall would hatch gall wasps, parasitoid wasps, or both — two wasps with one stone. “It’s often more like 20 wasps with one stone,” Dr. Forbes clarified. “Each gall wasp is attacked by between 10 and 25 different species of parasites.”

As the wasps hatched and chewed exit holes out of the galls, the researchers extracted samples of the insects’ DNA to examine the genetic variation among them. They then compared genetic results with the ecological findings, meaning which wasps were found on which types of galls on which trees. They also studied the insects’ anatomies, which were less helpful because the wasps looked extremely similar. This was how they found that the wasps most likely represented at least 16 species. (Potentially there were two more, but the researchers didn’t have enough samples to be certain.)

While the researchers expected Ormyrus labotus was not a single species, 16 to 18 distinct species came as a surprise. “Here are all these species in our small sampling,” Ms. Sheikh said. “It means there’s a lot more that we just haven’t captured yet.”

The paper does not formally describe or give a name to any species in the complex, as such taxonomic work would require more evidence and microscopic measurements of the wasps’ body parts. And the DNA analysis looked at only a single bar-coding mitochondrial gene. But Dr. Forbes hopes someone will take up the taxonomic mantle and name each of these 16 to 18 long-overlooked wasps. “This research adds to the case that we need further support to train and fund more taxonomists,” Dr. Rodriguez said.

Distinguishing dozens of identical-looking wasps from the slush of a single species is not just a taxonomic exercise. Parasitoid wasps’ extreme specializations make them excellent pest managers; in Hawaii, the parasitoid wasp Eurytoma erythrinae has significantly reduced the populations of a gall wasp that threatened the native wiliwili tree.

In Dr. Zhang’s opinion, entomologists often focus on bees and ants — the flashiest insects in the order Hymenoptera — while neglecting tiny parasitoid wasps.

“They are so undervalued because they are so tiny,” Dr. Zhang said. “But they’re iridescent, with beautiful glowy eyes.”

Dr. Zhang, who works out of the Smithsonian National Museum of Natural History, says the museum has at least 100 specimens labeled Ormyrus labotus. The tiny wasps are normally stored in drawers. But if brought into the light, their iridescent bodies will gleam, looking different from every angle.