IOWA CITY, Iowa — Last month, facing a budget shortfall of at least $75 million because of the pandemic, the University of Iowa welcomed thousands of students back to its campus — and into the surrounding community.

Iowa City braced, cautious optimism mixing with rising panic. The university had taken precautions, and only about a quarter of classes would be delivered in person. But each fresh face in town could also carry the virus, and more than 26,000 area residents were university employees.

“Covid has a way of coming in,” said Bruce Teague, the city’s mayor, “even when you’re doing all the right things.”

Within days, students were complaining that they couldn’t get coronavirus tests or were bumping into people who were supposed to be in isolation. Undergraduates were jamming sidewalks and downtown bars, masks hanging below their chins, never mind the city’s mask mandate.

Now, Iowa City is a full-blown pandemic hot spot — one of about 100 college communities around the country where infections have spiked in recent weeks as students have returned for the fall semester. Though the rate of infection has bent downward in the Northeast, where the virus first peaked in the U.S., it continues to remain high across many states in the Midwest and South — and evidence suggests that students returning to big campuses are a major factor.

In a New York Times review of 203 counties in the country where students comprise at least 10 percent of the population, about half experienced their worst weeks of the pandemic since August 1. In about half of those, figures showed the number of new infections is peaking right now.

Despite the surge in cases, there has been no uptick in deaths in college communities, data shows. This suggests that most of the infections are stemming from campuses, since young people who contract the virus are far less likely to die than older people. However, leaders fear that young people who are infected will contribute to a spread of the virus throughout the community.

The surge in infections reported by county health departments comes as many college administrations are also disclosing clusters on their campuses. 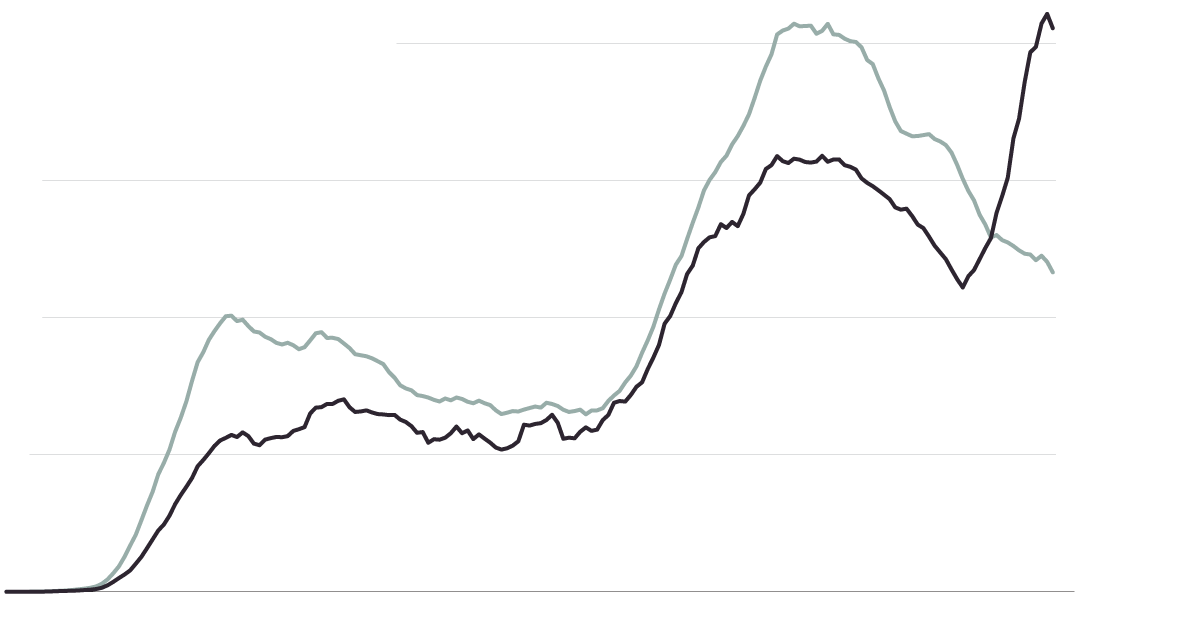 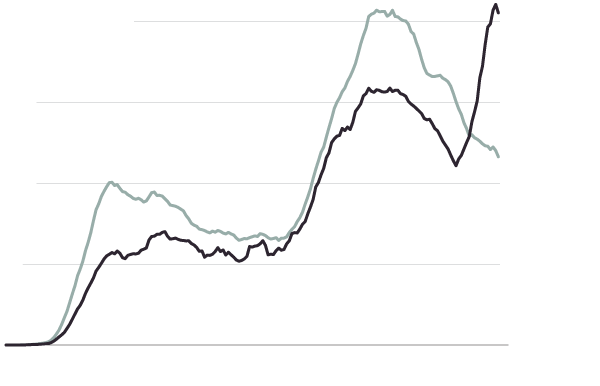 *Pitt County, N.C., site of East Carolina University, saw its coronavirus cases rise above 800 in a single week at the end of August. The Times has identified at least 846 infections involving students, faculty and staff since mid-August.

*In South Dakota’s Clay and Brookings counties, ballooning infections in the past two weeks have reflected outbreaks at the state’s major universities. In McLean County, Ill., the virus has been spreading as more than 1,200 people have contracted the virus at Illinois State University.

*At Washington State University and the University of Idaho, about eight miles apart, combined coronavirus cases have risen since early July to more than 300 infections. In the surrounding communities — rural Whitman County, Wash., and Latah County, Idaho — cases per week have climbed from low single-digits in the first three months of the pandemic, to double-digits in July, to more than 300 cases in the last week of August.

The Times has collected infection data from both state and local health departments and individual colleges. Academic institutions generally report cases involving students, faculty and staff, while the countywide data includes infections for all residents of the county.

It’s unclear precisely how the figures overlap and how many infections in a community outside of campus are definitively tied to campus outbreaks. But epidemiologists have warned that, even with exceptional contact tracing, it would be difficult to completely contain the virus on a campus when students shop, eat and drink in town, and local residents work at the college.

The potential spread of the virus beyond campus greens has deeply affected the workplaces, schools, governments and other institutions of local communities. The result often is an exacerbation of traditional town-and-gown tensions as college towns have tried to balance economic dependence on universities with visceral public health fears.

In Story County, Iowa, a local outcry following a burst of new Iowa State University cases pressured the university on Wednesday to reverse plans to welcome 25,000 football fans for its Sept. 12 opener against the University of Louisiana at Lafayette. In Monroe County, Indiana, the health department quarantined 30 Indiana University fraternity and sorority houses, prompting the university to publicly recommend that members shut them down and move elsewhere.

In Johnson County, where the University of Iowa is located, cases have more than doubled since the start of August, to more than 4,000. Over the past two weeks, Iowa City’s metro area added the fourth-most cases per capita in the country. The university has recorded more than 1,400 cases for the semester.

With a population of roughly 75,000, Iowa City relies on the university as an economic engine. The University of Iowa is by far the community’s largest employer, and its approximately 30,000 students are a critical market. Hawkeye football alone brings $120 million a year into the community, said Nancy Bird, executive director of the Iowa City Downtown District.

When the pandemic first hit in March, the university sent students home and pivoted to remote instruction, like most of the country’s approximately 5,000 colleges and universities. That exodus, heightened by health restrictions, has been an existential challenge for many downtown businesses, Ms. Bird said.

Jim Rinella, who owns The Airliner bar and restaurant, said the 76-year-old landmark across the street from campus “had zero revenue the whole month of April.” May was almost as scant, he said, and in June, he shut down after a couple of employees became infected.

By the time he reopened after July 4, too few students were in town to come close to making up the losses. He and his wife, Sherry, had hoped the campus reopening in August might be a lifeline.

The Rinellas live in Detroit, where they have other businesses, and Mr. Rinella said he was out of town when crowds jammed downtown on the weekend before the Aug. 24 start of classes. He said he immediately called his manager to make sure they were following state and local health rules.

But the photos taken by the local press from outside his establishment and others were damning. In an open letter, the university president lashed out, saying he was “exceedingly disappointed” in the failure of local businesses to keep students masked and socially distanced. Days later, the governor cited high infection rates among young people as she closed bars and restricted restaurants in Johnson County and five other counties with high concentrations of students.

Now The Airliner — where a booth is named for the University of Iowa’s most famous dropout, Tom Brokaw, and a modeling scout is said to have discovered Ashton Kutcher — has to close at 10 p.m. as well as require customers to buy a meal and sit far apart if they want to drink there.

“I’m at a pain point,” Mr. Rinella said. “If my grandfather hadn’t started the place, I’d question whether I want to be in the restaurant business.” A recent lunch hour visit found one customer at the bar drinking a beer.

The rise in local case counts reverberated at the county’s community college, which decided to start its fall semester with continued online instruction. Iowa City’s K-12 schools followed suit, which also meant canceling extracurricular activities, including sports, until students come back to the classroom in person.

“This is one of our last chances for college coaches to see us play or to get recent films sent out to college coaches. For some of us, playing in college is a goal we have been working toward since we were 11 or 12,” Lauren Roman, a 17-year-old high school volleyball player, told the school board last month. She burst into tears as she explained that she has waited since March for college recruiters to see her play. “Some of us really do need that scholarship money.”

“This sucks,” the board vice-president Ruthina Malone, agreed at the same meeting, choking up as she described emails she had received from families of children whose education relies on in-person instruction. But, she told the board, “we do not operate in isolation.” Her husband, she said, is an art teacher who would like nothing more than to teach again in person, and she works at the university.

The pandemic has hurt colleges’ finances in multiple ways, adding pressure on many schools to bring students back to campus. It has caused enrollment declines as students have opted for gap years or chosen to stay closer to home, added substantial costs for safety measures, reduced revenue from student room and board and canceled money-generating athletic events.

Governments have not always stepped into the breach: In Iowa, the state cut $8 million from its higher education appropriation even after the Board of Regents, which oversees the state’s universities, requested an $18 million increase. Over the summer, the University of Iowa announced a salary freeze and other significant cuts. This was before the Big Ten Conference postponed fall competition, erasing more than $60 million from the university’s athletics program.

When the university announced its plans for reopening with a combination of in-person and virtual instruction, it did not mention its finances as a factor, though it froze tuition rather than reduce it, as some universities have done. It also mandated mask wearing inside buildings and said it would test students with symptoms or who had been exposed to the virus.

Still, its decision to hold in-person classes drew criticism from some faculty. “We’re scared for our health and yours,” one group of instructors wrote in an open letter to students in July.

And its decision not to test asymptomatic students unless they had been exposed unnerved some city officials. Dr. Dan Fick, the campus health officer, said the university wanted to avoid a false sense of security.

But Janice Weiner, who represented the City Council in meetings with the business community and campus, questioned the approach. “We have a robust and capable medical community, we have good public health officials, we have everything we need,” she said. “But then the university didn’t require everyone coming back to campus to be tested.”

Iowa City is a blue town in a state with a pro-Trump Republican governor, Kim Reynolds, who has clashed with the state’s cities over masks and Covid policies.

Though the governor in March restricted large gatherings, closed Iowa schools and banned indoor operations of many businesses, she began relaxing those orders in May and has argued that face-mask mandates couldn’t be legally enforced.

Several municipalities have nonetheless passed ordinances requiring face masks, including Johnson County and Iowa City — largely in preparation for the return of students. But because state health rules have become a patchwork, not all returning students come from places where mask wearing is required, said Ms. Weiner. And, she said, the inconsistency offers an excuse to those who don’t want to wear them.

Interviews with students suggested that concern had at least some justification.

“If people get sick, they get sick — it happens,” Mady Hanson, a 21-year-old exercise science major, said last week on campus. She added that she and her family had survived Covid-19 and that she resented the city’s “ridiculous” restrictions.

“We’re all farmers and don’t really care about germs, so if we get it, we get it and we have the immunity to it.”

Both university and city officials said they believe the spike in cases has been a wake-up. “When we look back,” said Dr. Fick, “I think we’ll be proud that when students got the message, a majority stepped up.”

On the City Council, Ms. Weiner was less upbeat.

“There’s not a whole use in placing blame — we have to figure out a way forward,” she said. “But it’s going to take a herculean effort here for our numbers to start to go down.”