A Lion of the Civil Rights Era Is Still Preaching Optimism 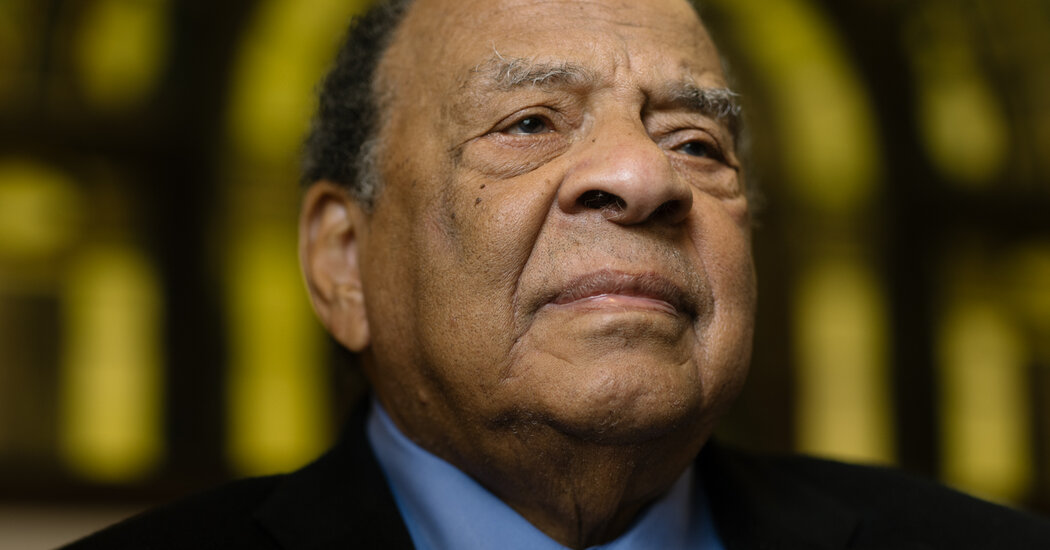 ATLANTA — Andrew Young was beaten by white supremacists at a civil rights march in St. Augustine, Fla., in 1964. And he was close by when an assassin’s bullet fatally severed the spine of his friend and mentor, the Rev. Dr. Martin Luther King Jr., in Memphis in 1968.

He would go on to become the U.S. ambassador to the United Nations and, later, a formative mayor and leader of modern Atlanta, helping the Southern city expand its airport, lure international investment and land the 1996 Olympics. On the cusp of his 90th birthday, the city that he helped shape has staged a weeklong celebration of his life and legacy — with a church service, a gala dinner, a museum exhibit and, on Thursday, a peace march downtown.

It comes at a volatile time, as Mr. Young, one of the last great lions of the 1960s civil rights movement and a student of Gandhian nonviolence, has watched resurgent racial tensions on the home front and menacing nuclear storm clouds abroad.

Yet in an interview this week at his Atlanta home, Mr. Young made the case for his particular brand of optimism.

“Everybody who’s Black has got to be optimistic,” he said. “People do give up. And people do despair. But there’s nothing about the culture that came out of slavery from Africa that let the people give up.”

Mr. Young, who turns 90 on Saturday, presented his argument with a chuckle, with a few reminders of the David vs. Goliath nature of the civil rights movement that he helped to lead, and a snatch of lyrics from a 1961 Ike and Tina Turner hit: “Oh darling, I think it’s gonna work out fine.”

It was a typical flourish from the famously broad-gauge and voluble Mr. Young, whose mind remains razor-sharp even as his wobbly knees have made climbing steps a chore. These days, Mr. Young’s lengthy answers to simple questions are not exactly meandering, but more stratigraphic, moving through layers of history and lived experience, and studded with mentions of philosophical influences, political heavyweights, intimates and stars.

The celebration of Mr. Young in Atlanta, where he served as mayor from 1982 to 1990, has provided a moment to amplify one of the last living voices from Dr. King’s inner circle at a moment eerily reminiscent of his era. It is a voice from a cohort that Mr. Young has described as the “30ish, Southern-born Negro preachers” who largely made up the Southern Christian Leadership Conference, one of the key drivers of the 1960s civil rights struggle, co-founded by Dr. King and helmed for a period by Mr. Young.

An ordained minister who grew up in New Orleans, Mr. Young once described that group as driven by a faith in God, as well as “the undiminished potential of our country,” a position that stood in contrast with some of the more radical Black activists of the last century, as well as the current one.

On Tuesday, roughly 24 hours before delivering a sermon on the topic of peace and reconciliation, Mr. Young was at home among his books and mementos and collection of African art. He was not sure exactly what he would say, although he did not seem worried. He had been taught early on that preaching, like jazz, runs best on improvisatory fire.

“When I went to this little country church down in South Georgia, I was 21,” he said, “And the deacons called me together and they said, ‘Now, we know you’ve been up north to school and all, but you need to know that we don’t believe in paper in the pulpit. If you have paper in the pulpit, pretty soon nobody’s going to come to church.’”

But he had been preparing. The night before, he said, he had been taking a fresh look at Tolstoy’s late-19th century treatise “The Kingdom of God Is Within You,” which argues that even defensive violence is immoral. He clung to that lesson during the civil rights era, as he would write in his 1996 book: “We knew that the freedom to which we aspired could never be achieved by killing.”

In the context of current affairs, however, Mr. Young said he believed it was right for the Ukrainians to fight their Russian aggressors. “I mean, I don’t believe in it, but I wouldn’t condemn someone else for defensive violence,” he said.

The people of Atlanta, in particular, are familiar with Mr. Young’s engagement with civic affairs, and his track record of generating controversies that tend to elbow for space with the near-universal admiration he has earned for his contribution to the American project. For years, he has spoken favorably of Robert Mugabe, extolling the role of the late Zimbabwean leader in his country’s independence movement but downplaying his years of repressive and bloody rule. “Robert Mugabe is almost a saint,” Mr. Young said on Tuesday.

He has said he disagrees with activists who have been pushing to remove Confederate symbols from public spaces in many Southern cities: “I’ve always been interested more in substance over symbols,” he said in 2017. These days, Mr. Young maintains that the long, successful fight to remove the Confederate battle emblem from the Georgia state flag poisoned the political atmosphere in the state and hampered road-building that might have alleviated Atlanta’s soul-numbing traffic problem.

“You see what you lost when you got that flag,” he said this week, “and it just was not worth it.”

Perhaps unsurprisingly for a big-city Southern mayor, Mr. Young has long valued practical problem solving and consensus building among opposing political forces. But he sees it as more difficult at a moment when many Republican leaders have embraced racial grievances, and when former President Donald J. Trump and his supporters have peddled so much misinformation.

“For the first time in my life,” Mr. Young said in the interview, “truth did not seem to matter.” But soon, he was quoting the 19th-century American poet William Cullen Bryant: “Truth, crushed to earth, shall rise again.”

On Wednesday, Mr. Young stood at the pulpit of First Congregational Church in downtown Atlanta, wearing a blue and yellow necktie to honor the people of Ukraine.

His sermon bounced from decade to decade and place to place. He spoke of his childhood in a multicultural New Orleans neighborhood that was less than idyllic, with a Nazi party headquarters on the corner. He described white supremacy as a sickness. “And you don’t get mad with sick people,” he said. “You try to help them.”

He spoke of his voyages around the old Soviet Union and the good people he had met there. He spoke of Dr. King’s detention in Birmingham, Ala. He recalled his own hostile reception in St. Augustine, and argued that the peaceful response of Black people in that city, when attacked by white supremacists, helped convince members of Congress to pass the 1964 Civil Rights Act. “They somehow got caught up in what we felt to be the love of Jesus.”

He mentioned the Tolstoy work. He said he wished that the kingdom of God would find its way into the heart of Vladimir Putin, and he described the challenge of the moment: “Loving those who are unlovable.”