A Deadly Riot, and Then 3 Trials, 110 Convictions and 19 Executions 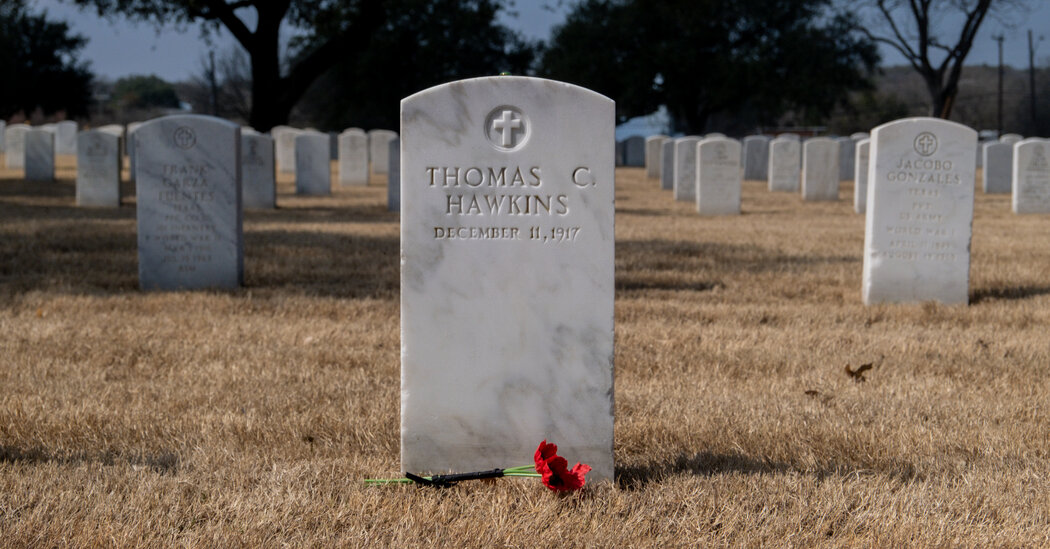 [Race/Related is available as a newsletter. Sign up here to get it delivered to your inbox.]

SAN ANTONIO — Charles Anderson slowly approached the altar at the Gift Chapel at Joint Base San Antonio-Fort Sam Houston and zeroed in on a century-old grainy photo of 63 Black soldiers. He quickly spotted his distant cousin, Sgt. William C. Nesbit, and ran his hand over his relative’s stoic expression.

The photograph showed Sergeant Nesbit and 62 other members of the 3rd Battalion, 24th Infantry at a military trial for their alleged roles in a deadly riot in Houston in 1917 that left 19 people dead. Mr. Anderson’s cousin and 12 others were later found guilty and hanged on a gallows near Salado Creek, which runs through San Antonio, in what military officials now call one the most unjust military trials in the nation’s history.

Earlier this week, Mr. Anderson and two other descendants of the executed soldiers took a somber tour of where their relatives spent their last hours. When Mr. Anderson entered the chapel, which was used as a courtroom to hold all 63 defendants, he shook his head and tried to imagine how his kinsman must have felt in that moment.

Sergeant Nesbit belonged to the all-Black 24th Infantry Regiment, which was assigned to guard the construction of a training camp for white soldiers in Houston. The mostly white population greeted them with racial epithets and physical violence. The tension erupted in a deadly riot on Aug. 23, 1917, said John A. Haymond, a military historian who led the tour. The uprising lasted more than two hours and claimed 19 lives — a mix of 15 white police officers, soldiers and civilians and four Black soldiers, according to historical records.

“I’m standing here at the place where he was sitting,” Mr. Anderson said. “He must have been so scared. Some of them had hope until the very end.”

There was a measure of hope on Tuesday as military officials and members of the Buffalo Soldiers, a fraternity of Black soldiers, joined the descendants of the fallen in a solemn ceremony to memorialize their sacrifices. Officials unveiled a marker at the cemetery grounds, steps from where the soldiers are buried. Titled “The Legacy of the Houston ‘Mutineers,’” which includes the rare photo of the military trial and a harrowing headline from the San Antonio Express that read, “13 Negroes Executed.”

The trial was later decried as depriving the soldiers of a fair process. Their defense was conducted by a single officer who had some legal experience but was not a lawyer, and they were denied any opportunity to appeal their sentences. In all, there were three trials, 110 convictions and 19 executions.

The Pentagon is in the process of reviewing a clemency petition. The injustice has since served “as a catalyst for change in our military justice system,” said Gabe Camarillo, the Under Secretary for the Army.

Today, every soldier has the right to appeal a conviction and every execution must be reviewed by a sitting U.S. President, Mr. Camarillo said.

In 1937, the soldiers’ bodies were moved from unmarked graves to the Fort Sam Houston National Cemetery grounds.

“Today, they’ll finally begin to receive a small measure of the dignity that they have long deserved,” Donald Remy, the Deputy Secretary of Veterans Affairs, said of the memorial and the signage.

Still, though it has been more than 100 years, the pain feels fresh for the living relatives of those young soldiers.

When the group on the tour reached the building where the soldiers were held before their executions, Angela Holder, a great-niece of Corporal Jesse Moore, took a deep breath and ran her hand over the red bricks, windows and doors of the structure that now serves as Army offices.

“They were taken from here,” Ms. Holder told Jason Holt, the nephew of another fallen soldier. “They were so young. They didn’t have the chance to live their lives.”

Ms. Holder bit her lip to keep from crying.

Inside this exposed-brick building, Mr. Holt’s uncle, Pvt. Thomas Hawkins, wrote a final letter to his parents on Dec. 11, 1917, hours before his death.

Earlier in the day, Mr. Holt had read excerpts from the letter at the event. “I’m sentenced to be hanged for the trouble that happened in Houston,” Mr. Holt read aloud, at times pausing to regain his composure. “Although I am not guilty of the crime that I’m accused of Mother, it’s God’s will that I go now and in this way.”

Later, Mr. Haymond, the military historian who conducted the tour, led the family members to the site where the men were executed, not far from where the base’s elementary school sits today. He then walked them to an area steps from Salado Creek, where the men had previously been buried, not with their dog tags, but each with an empty soda bottle containing a piece of paper with his name written on it.

Mr. Holt made his way through brush area and looked around at the dry trees. “This doesn’t look big enough for 13,” he said mostly to himself.

Ms. Holder caught her breath and surveyed the dirt ground in disbelief. “Oh my God,” she whispered. “This is no way to bury a human being.”

She walked to the main road and took one last glance. Coming here, she said, was painful, but necessary.

“I’m glad this is all coming out now,” she said, “so that this doesn’t happen again.”