A Baby Abduction, a DNA Match and a Tearful Reunion 51 Years Later 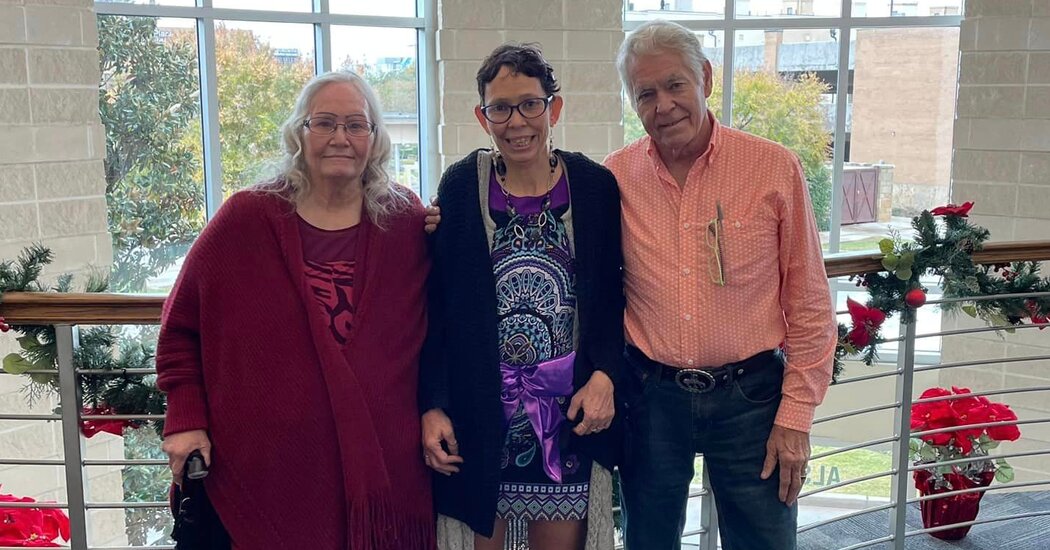 When the Facebook message that challenged her entire life’s story arrived earlier this month, Melanie Walden refused to believe it. “There’s no way that could be me,” she told the people who sent it.

But the message, from two women who said they were her sisters and a man who said he was her father, insisted that she had been abducted as a 1-year-old in 1971 and that they had spent five decades, nearly their entire lives, searching for her. And they had DNA evidence.

Ms. Walden, 53, who cleans houses and her local church, was settled in her life in Fort Worth, after several marriages and three children. “I couldn’t believe such a thing,” she said in an interview Tuesday.

The women, Sharon Highsmith and Rebecca Del Bosque, and the man, Jeffrie Highsmith, told Ms. Walden that her real name was Melissa Highsmith — “Baby Melissa” in the missing posters — and that she had been taken away by a woman posing as a babysitter in Fort Worth all those years ago.

After decades of fruitless investigations, false leads and disappointments, the family was notified on Nov. 6 about a DNA match that showed Mr. Highsmith had a grandchild he didn’t know about. It was one of Ms. Walden’s children. The match was based on samples submitted to 23andMe, the genetic testing company, according to the National Center for Missing and Exploited Children.

Sharon Highsmith, 45, said on Monday that Ms. Walden told them that she thought they were trying to scam her. She said she would pray for them. But then Ms. Walden started reading articles about the Highsmith family. The girl in the missing poster had a birthmark on her back. So did Ms. Walden. Her husband studied the baby photos on the family’s Facebook page. Soon she had a change of heart, she said.

Ms. Walden said she then asked the woman who had raised her — the woman she thought was her mother — about her real identity. Yes, she was told, she had paid $500 for her in 1972. She was Baby Melissa, the woman said.

Further DNA testing confirmed it. At a church in Fort Worth on Saturday, Ms. Walden met with her father, Mr. Highsmith, and her mother, Alta Apantenco, 73, in a tearful reunion filled with hugs and prayer. They gave interviews to a local TV station, and the story was picked up by news outlets around the world.

“It was very emotional,” Ms. Walden said in an interview. “One of the first things that came to my mind was, ‘I finally have a mother and a father that want me, and they love me. I finally have people that love me.’”

“I couldn’t believe it,” Ms. Apantenco told CBS 11 of Fort Worth. “I thought I would never see her again.”

Ms. Walden said that she would be changing her name back to Melissa Highsmith and even updated her Facebook page to reflect that.

It was unclear who abducted Baby Melissa, or how the woman who raised her became her guardian. Ms. Walden would not name her.

Under the name Melanie Miyoko, she grew up and attended Southwest High School in Fort Worth, where she was a member of the Class of 1989, according to the yearbook.

She also faced some struggles. She said she ran away from her new family when she was 15.

“I had an abusive childhood,” she said. “I was seeking a better life.”

In the 1990s, when she was in her 20s and known as Melanie Gaige, a married name, she was arrested at least four times and charged with misdemeanors related to prostitution, according to Texas criminal records. She had no education or experience, she said, adding: “I did the only thing that I could do. I worked the streets.”

During those years, she gave birth to three children. One of her sisters said that all three had been put up for adoption. Ms. Walden said she later turned her life around, became a religious person and worked fast food jobs and cleaning churches.

Many questions remain about the abduction itself. The Highsmith family is still pressing for a police investigation.

In a statement on Monday, the Fort Worth Police Department said that it was “overjoyed” that the family had found Melissa, but the department did not respond to questions about the abductor. It said that it would continue to investigate the case, but said that the criminal statute of limitations expired in 2007.

The abduction happened on Aug. 23, 1971, according to the National Center for Missing and Exploited Children. Ms. Apantenco, who was 22 and working as a waitress, needed someone to watch her daughter. After placing a babysitter’s ad in the newspaper, Ms. Apantenco arranged for the woman to pick up Melissa, who was 21 months old, from her roommate while she was at work, the center said. Ms. Apantenco never met the woman. When she did not return with Baby Melissa, Ms. Apantenco called the police.

The police investigations proved futile. The family said Ms. Apantenco even faced accusations that she had hurt or killed the child herself. As the years passed, the Highsmiths took matters into their own hands.

Ms. Highsmith and Ms. Del Bosque, 48, remember their parents chasing leads in Texas even after their family moved to Illinois in the late 1970s.

“Every time they did they would come back disappointed,” Ms. Del Bosque, said on Monday. “It was really heartbreaking for me and for our family. It was very emotionally draining.”

Jeff Highsmith, who was born after his sister was abducted, and his wife hired a private investigator to search for leads on Melissa’s whereabouts. They also created a Facebook group, “Help find Melissa Highsmith,” to look for any tips. (The group, which has grown to more than 6,500 members over the years, has been renamed “We Found Melissa!!!”)

Over the years, three women who believed they might be Melissa had reached out to Jeff Highsmith, but DNA tests came back showing they were not her, the center said.

“We just never gave up the hope,” Ms. Del Bosque said. “We just really united as a family to keep pushing.”

The breakthrough came earlier this year, with the father’s DNA match with the unknown grandchild. Lisa Jo Schiele, a clinical laboratory scientist and an amateur genealogist, said Tuesday that she was asked by the family this month to answer the question, “Is this what we think it is?”

Ms. Schiele poured through the records and contacted a genetic relative of Ms. Walden’s on Ancestry.com who gave her enough information to dig through public records to identify her in about two hours. That’s when the family sent the Facebook message.

While Ms. Walden has now met her birth parents, her brother and another sister, Victoria Garner, she has yet to meet Ms. Del Bosque, of Chicago, or Ms. Highsmith, who lives in Madrid. They plan to meet at Christmas in Fort Worth.

“Her life wasn’t what she thought it was,” Ms. Highsmith said of her rediscovered sister. “What Melissa wants right now is to enjoy being reunited with a family that loves her, a family that never stopped looking for her and a family that has found her.”

Ms. Walden agreed. “I feel like I’ve had a second chance at life.”