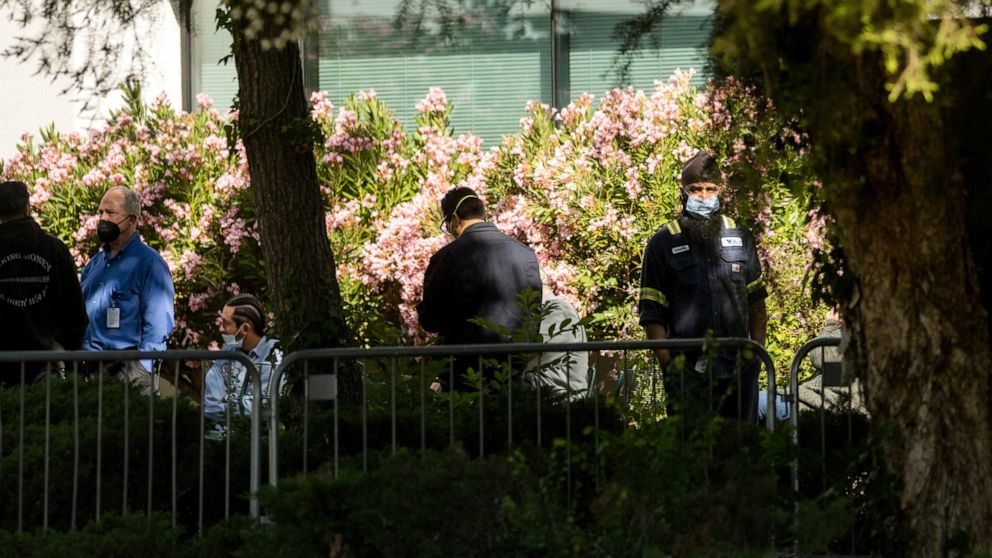 The suspect was an employee of the Valley Transportation Authority, which provides bus, light rail and other transit services throughout Santa Clara County, the most populated county in the Bay Area, authorities said.

The attacker was identified as 57-year-old Sam Cassidy, according to two law enforcement officials. Investigators offered no immediate word on a possible motive.

The shooting took place around 6:30 a.m. at a light rail facility that includes a transit-control center, parking for trains and a maintenance yard.

Sheriff’s spokesman Deputy Russell Davis said the attack also resulted in “multiple major injuries.” He did not know the type of weapon used. He said the victims included VTA employees. Authorities did not release any of the victims’ names.

“These folks were heroes during COVID-19. The buses never stopped running, VTA didn’t stop running. They just kept at work, and now we’re really calling on them to be heroes a second time to survive such a terrible, terrible tragedy,” Santa Clara County Supervisor Cindy Chavez.

Santa Clara County District Attorney Jeff Rosen said it was his understanding the shooting happened inside the VTA building during a morning meeting.

Victims’ grief-stricken families sat huddled together, holding hands and crying, after learning they had lost a loved one, Rosen told reporters, describing the scene inside a county building.

“They’re just sitting and holding hands and crying,” Rosen said. “It’s terrible. It’s awful. It’s raw. People are learning they lost their husband, their son, their brother.” He said about 100 people were inside the family reunification center.

Police vehicles and orange crime-scene tape blocked off the area, and reporters were kept at a distance The rail yard is in the city’s administrative neighborhood, near the sheriff’s office and city and county offices.

Bomb squads were searching the rail complex after receiving information about possible explosive devices inside the building, Davis said.

Cassidy had worked for the VTA since at least 2012, according to the public payroll and pension database known as Transparent California. His position from 2012 to 2014 was listed as a mechanic. After that, he was a substation maintainer, the records said.

VTA trains were already out on morning runs when the shooting occurred. Light rail service was to be suspended at noon and replaced with bus bridges, agency Chairman Glenn Hendricks told a news conference.

“It’s just very difficult for everyone to be able try to wrap their heads around and understand what has happened,” Hendricks said.

Outside the scene, Michael Hawkins told The Mercury News that he was waiting for his mother, Rochelle Hawkins, who had called him from a co-worker’s phone to assure him that she was safe.

When the shooting started, “she got down with the rest of her coworkers” and dropped her cellphone, Michael Hawkins told the newspaper. Rochelle Hawkins did not see the shooter, and she was not sure how close she had been to the attacker, her son said.

The bloodshed comes in a year that has seen a sharp increase in mass killings as the nation emerges from pandemic restrictions that closed many public places and kept people confined to their homes.

A database compiled by The Associated Press, USA Today and Northeastern University that tracks every mass killing over the last 15 years shows that the San Jose attack is the 15th mass killing so far in 2021, all of them shootings.

Eighty-six people have died in the shootings, compared with 106 for all of 2020. It is the sixth mass killing in a public place in 2021. The database defines mass killings as four people dead, not including the shooter, meaning the overall toll of gun violence is much higher when adding in smaller incidents.

“What’s clear, as the President has said, is that we are suffering from an epidemic of gun violence in this country, both in mass shootings and in the lives that are being taken in daily gun violence that doesn’t make national headlines,” she said.

San Jose, the 10th-largest city in the U.S. with more than a million people, is about 50 miles south of San Francisco in the heart of Silicon Valley.

In the city itself, the most recent mass shooting occurred in 2019 at a private home, according to The Mercury News. Police said it was a quadruple murder and suicide precipitated by family conflict.

Wednesday’s attack was the county’s second shooting in less than two years. A gunman killed three people before killing himself at a popular garlic festival in Gilroy in July 2019.