6 ships in Gulf of Oman lose control, days after vessel attacked by drones – The Times of Israel

DUBAI, United Arab Emirates — At least six ships off the coast of the United Arab Emirates broadcast warnings Tuesday that they had lost control of their steering under unclear circumstances as British authorities reported “a potential hijack” was underway in the area.

It wasn’t immediately clear what was happening off the coast of Fujairah in the Gulf of Oman.

According to the Reuters news agency, which quoted two security maritime sources, Iranian-backed forces were believed to have seized one of the tankers.

The six vessels announced around the same time via their Automatic Identification System trackers that they were “not under command,” according to MarineTraffic.com. That typically means a vessel has lost power and can no longer steer.

“At the same time, if they are in the same vicinity and in the same place, then very rarely that happens,” said Ranjith Raja, an oil and shipping expert with data firm Refintiv. “Not all the vessels would lose their engines or their capability to steer at the same time.”

One of the vessels later began moving. 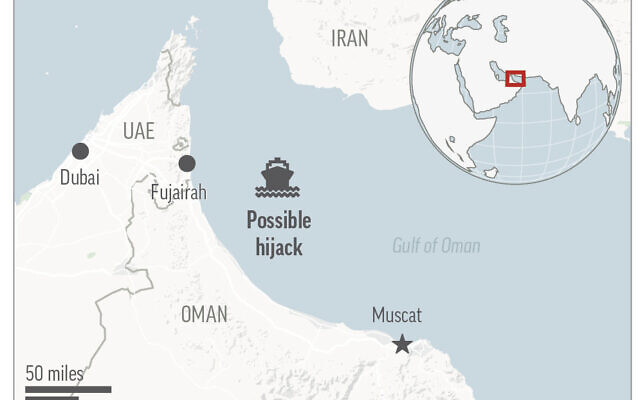 A ship in the Gulf of Oman may have been a hijacking target Tuesday. (AP Graphic)

An Oman Royal Air Force Airbus C-295MPA, a maritime patrol aircraft, flew in circles for hours over the area where the ships were, according to data from FlightRadar24.com.

“Iran’s naval forces are ready for help and rescue in the region,” Khatibzadeh said.

The United States stopped short of assigning blame for the latest episode but State Department spokesman Ned Price said there has been “a very disturbing pattern of belligerence from Iran.”

“When it comes to this specific incident, it’s too early for us to offer a judgment just yet,” Price told reporters.

White House spokeswoman Jen Psaki said the United States was in close touch with Britain over the “deeply concerning” incident.

The British military’s United Kingdom Maritime Trade Operations initially only warned ships that “an incident is currently underway.” Hours later, they said the incident was a “potential hijack.” They did not elaborate.

The event comes just days after a drone struck an oil tanker linked to an Israeli billionaire off the coast of Oman, killing two crew members. The West blamed Iran for the attack, which marked the first known assault to have killed civilians in the yearslong shadow war targeting commercial vessels in the region.

Iran denied playing any role in the incident, though Tehran and its allied militias have used similar “suicide” drones in attacks previously.

Israel, the United States and United Kingdom vowed a “collective response” to the attack, without elaborating.