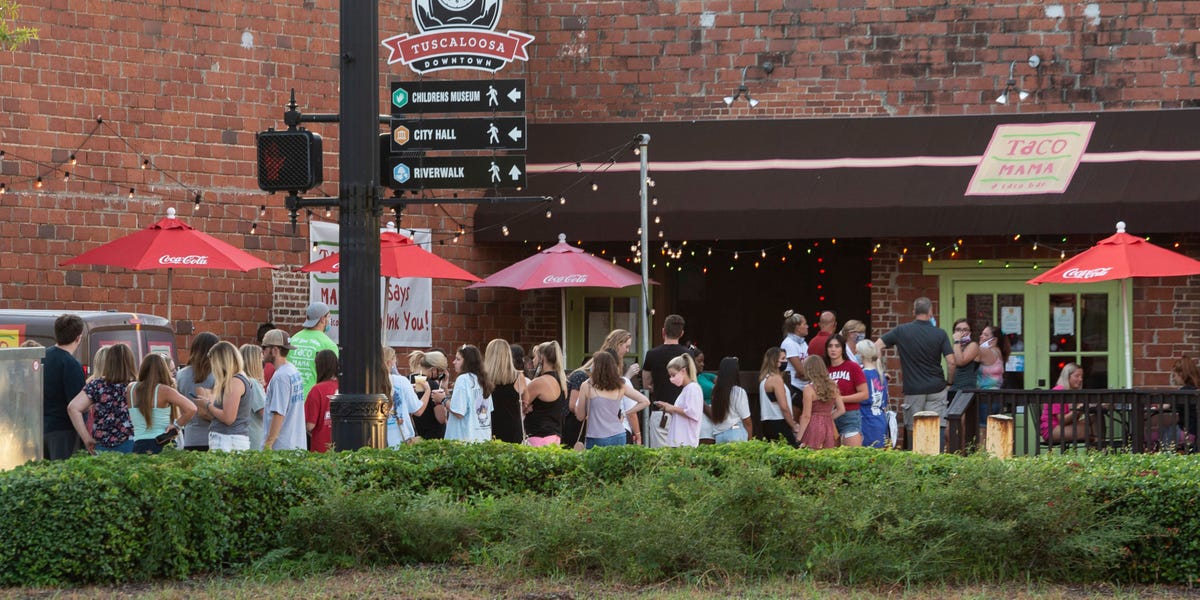 On Monday, six days after the first classes began at the University of Alabama, the school reported a total of 566 cases of the coronavirus.

The school has employed a combination of in-person and hybrid courses in the academic year because of the pandemic.

As students returned to campus around the first day of school on August 19, photos circulated on social media showing what appeared to be University of Alabama students crowding outside bars in Tuscaloosa, where the flagship campus is.

Tuscaloosa Mayor Walt Maddox announced an executive order to close local bars for two weeks effective Monday, per the request of the University of Alabama.

On Monday, the University of Alabama’s president said in a letter to students, faculty, and staff that the rise in positive coronavirus cases was “unacceptable.” He added that violations of health and safety protocols “both on and off campus” were subject to “harsh disciplinary action, up to and including suspension from UA.” However, he said “completing the fall semester together” was his goal.

The University of Alabama did not immediately respond to Business Insider’s request for comment on whether its plans to reopen have changed since the spike in COVID-19 cases.

Meanwhile, the school’s student newspaper published an opinion column one day after reopening that criticized the university.

“Students have taken the University’s requirements as suggestions solely because administration has as well,” the column said in part.

The op-ed, titled “No, President Bell, we won’t be your PR,” also said the school’s president told student journalists months earlier to “be careful what we publish during this time,” to which the student newspaper responded by saying their job as campus journalists is to “address accomplishments, opinions and concerns at this University.”

UPenn just rolled back return-to-campus plans and is dropping its planned bump in tuition, as more schools reconsider in-person classes