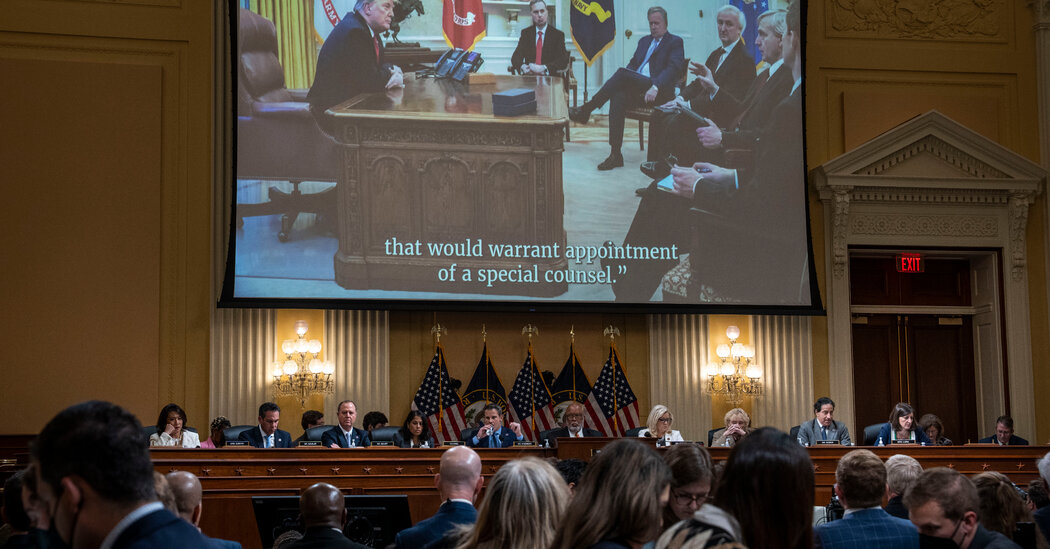 It was the most blatant attempt to use the Justice Department for political ends at least since Watergate.

Mr. Trump aggressively pursued a plan to install as acting attorney general a little known Justice Department official, Jeffrey Clark, who was prepared to take actions to reverse the election results. As they fought to head off the move, a group of White House lawyers and the leadership of the Justice Department feared that the plan was so ill-conceived and dishonest that it would have spiraled the country into a constitutional crisis if it had succeeded.

The president came so close to appointing Mr. Clark that the White House had already begun referring to him as the acting attorney general in call logs from Jan. 3, 2021. Later that day, Mr. Trump had a dramatic Oval Office showdown with top Justice Department officials and White House lawyers, who told Mr. Trump that there would be a “graveyard” at the Justice Department if he appointed Mr. Clark because so many top officials would resign.

In the meeting, Mr. Trump chastised the acting attorney general, Jeffrey A. Rosen, for refusing to do more to help him find election fraud. Only after hours of argument — partly about the lack of substance behind Mr. Trump’s claims of election fraud but also about the political ramifications for him if he took action that led to the exodus of top Justice Department officials — did Mr. Trump relent and back off his plan to replace Mr. Rosen with Mr. Clark.

The heart of the scheme was a draft letter to officials in Georgia.

At the center of the plan was a letter drafted by Mr. Clark and another Trump loyalist that they hoped to send to state officials in Georgia. The letter falsely asserted that the department had evidence of election fraud that could lead the state to rethink its certification of Joseph R. Biden Jr.’s victory there. The letter recommended that the state call its legislature into session to study allegations of election fraud and consider naming an alternate slate of electors pledged to Mr. Trump.

The department’s top officials and Mr. Trump’s legal team in the White House were all appalled by the letter because it would be giving the imprimatur of the nation’s top law enforcement agencies to claims of election fraud that the department had repeatedly investigated and found baseless. The letter was so outrageous that a top White House lawyer, Eric Herschmann, testified that he told Mr. Clark that if he became attorney general and sent the letter he would be committing a felony.

“For the department to insert itself into the political process this way, I think would have had grave consequences for the country,” Mr. Donoghue said. “It may have spiraled us into a constitutional crisis.”

Trump would not give up on his claims of fraud.

Time after time, the White House brought baseless and sometimes preposterous claims of election fraud — including internet conspiracy theories — to Justice Department officials so that they could use the nation’s law enforcement powers to investigate them. And time after time, the department and the F.B.I. found the claims had no validity.

The pattern became so extraordinary that at one point the White House chief of staff, Mark Meadows, sent a YouTube video to department officials from Representative Scott Perry, Republican of Pennsylvania, that claimed an Italian defense contractor uploaded software to a satellite that switched votes from Mr. Trump.

The Themes of the Jan. 6 House Committee Hearings

A top Defense Department official, Kashyap Patel, followed up with Mr. Donoghue about the claim, and the acting defense secretary, Christopher C. Miller, reached out to a defense attaché in Italy to discuss the claim, which was never substantiated.

About 90 minutes after Mr. Donoghue had helped persuade Mr. Trump not to install Mr. Clark as acting attorney general, Mr. Trump would still not let go, calling Mr. Donoghue on his cellphone with another request: to look into a report that an immigration and customs agent in Georgia had seized a truck full of shredded ballots. There turned out to be nothing to it, Mr. Donoghue testified.

Trump considered naming a loyalist lawyer as a special counsel.

As Mr. Trump searched for any way to substantiate the false fraud claims, he tried to install a loyalist as a special counsel to investigate them. One of Mr. Trump’s personal lawyers, Sidney Powell — who had become a public face of Mr. Trump’s attempts to overturn the election — said in testimony played by the committee that Mr. Trump discussed with her the possibility of taking on that position in December.

The committee also played testimony of William P. Barr, who was attorney general until the middle of December 2020, saying that there was no basis to appoint a special counsel. And the committee suggested that the idea was part of the larger effort to cast doubt on the legitimacy of Mr. Biden’s victory and open the door to Congress considering alternate slates of Trump electors from swing states.

“So let’s think here, what would a special counsel do?” said Representative Adam Kinzinger, Republican of Illinois, who led the day’s questioning. “With only days to go until election certification, it wasn’t to investigate anything. An investigation, led by a special counsel, would just create an illusion of legitimacy and provide fake cover for those who would want to object, including those who stormed the Capitol on Jan. 6.”

Mr. Kinzinger added: “All of President Trump’s plans for the Justice Department were being rebuffed.”

Members of Congress sought pardons — and Trump considered the requests.

In the days after Jan. 6, several of Mr. Trump’s political allies on Capitol Hill, who had helped stoke the false election claims and efforts to overturn the results, sought pardons from Mr. Trump, who considered granting them, according to testimony on Thursday.

Among those looking for a pardon was Representative Matt Gaetz, Republican of Florida. Mr. Gaetz was seeking a blanket pardon that would have essentially covered any crime he had committed in his entire life. Although it was not known publicly at the time, Mr. Gaetz was under Justice Department investigation for paying a 17-year-old girl for sex.

“The general tone was, ‘We may get prosecuted because we were defensive of, you know, the president’s positions on these things,’” Mr. Herschmann, the White House lawyer, said in a video clip of his testimony. “The pardon that he was requesting was as broad as you could describe. I remember he said ‘from the beginning of time up until today. For any and all things.’”

“Nixon’s pardon was never nearly that broad,” Mr. Herschmann recalled saying at the time in response to the request.

A slew of other allies asked for them. Representative Mo Brooks, Republican of Alabama, sent an email to the White House seeking so called pre-emptive pardons for all House and Senate members who had voted to reject the Electoral College vote certifications of Mr. Biden’s victories in Arizona and Pennsylvania.

A former aide to Mr. Meadows, Cassidy Hutchinson, testified that several other Republican House members expressed interest in pardons, including Mr. Perry and Representatives Louis Gohmert of Texas and Andy Biggs of Arizona.

Ms. Hutchinson said she had also heard that Representative Marjorie Taylor Greene of Georgia had reached out to the White House Counsel’s Office about a pardon.

Mr. Trump “had hinted at a blanket pardon for the Jan. 6 thing for anybody,” Mr. Trump’s former head of presidential personnel, John McEntee, testified.

Mr. Kinzinger suggested that the pardon requests were evidence that Mr. Trump’s allies had consciousness of guilt.

“The only reason I know to ask for a pardon is because you think you’ve committed a crime,” he said.