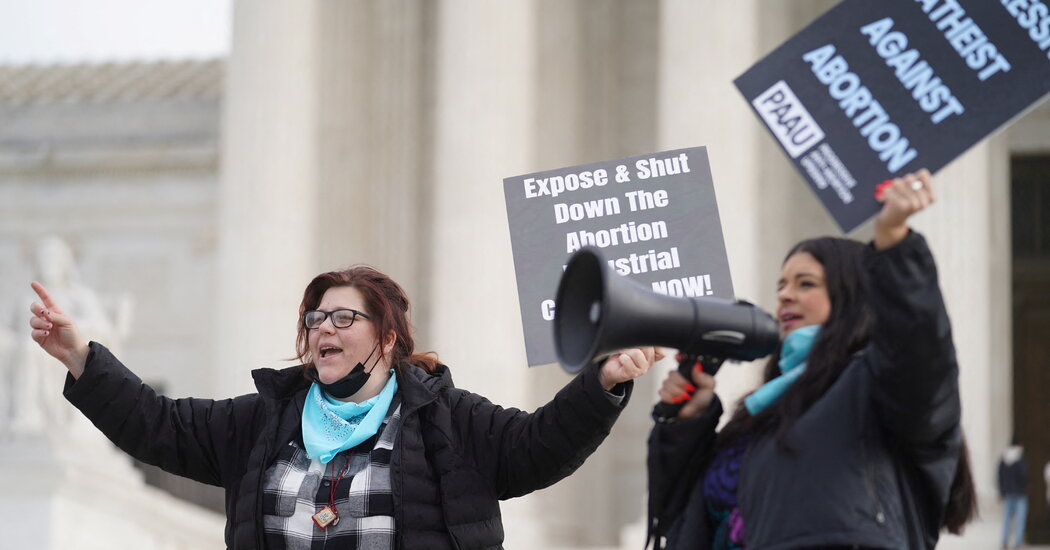 The police said on Thursday that five fetuses had been removed from a home in Washington that, according to an anti-abortion group, belonged to an activist who was charged by the Justice Department this week with blocking access to an abortion clinic in October 2020.

The Metropolitan Police Department of the District of Columbia would release only the address where the fetuses were found. Terrisa Bukovinac, the founder and executive director of Progressive Anti-Abortion Uprising, confirmed that the home belonged to Lauren Handy, 28, the group’s director of activism, who was arrested and charged with federal civil rights offenses this week.

Ms. Handy and Mary Petras, the lawyer representing her in the federal case, did not immediately respond to emails.

But in a statement on Friday, Progressive Anti-Abortion Uprising said one of the individuals who had been charged was trying to turn the fetuses over to the police for an investigation. The group said they were in “their late gestational ages” and in a condition that showed possible violations of the federal Partial Birth Abortion Act, which bans certain medical procedures late in a pregnancy. The group also said a funeral Mass and “naming ceremony” were held. The District of Columbia police declined to comment.

The television station WUSA reported that it had a camera outside Ms. Handy’s home on Wednesday when homicide and forensic services detectives removed evidence in red biohazard bags and coolers from the basement. Ms. Handy declined to say what was in the coolers but said that “people would freak out when they heard,” WUSA reported.

The police said they had gone to the home around 12:30 p.m. on Wednesday to investigate a tip about “potential biohazard material” when officers found the fetuses inside. The fetuses were collected by the Office of the Chief Medical Examiner, the police said, and an investigation was continuing. No charges have been announced in connection with the discovery.

The fetuses “were aborted in accordance with D.C. law, so we are not investigating this incident along those lines,” Ashan M. Benedict, the executive assistant chief of police, said at a news conference on Thursday.

“There doesn’t seem to be anything criminal in nature right now about that, except for how they got into this house,” Chief Benedict said, “and so we’ll continue to look at that.”

In a two-count indictment announced by the Justice Department on Wednesday, Ms. Handy was charged with directing eight other people who used their bodies, furniture, chains and ropes to block the doors of an abortion clinic in Washington on Oct. 22, 2020 — an action that one of them livestreamed on Facebook.

The clinic was not identified in court papers, although Ms. Bukovinac said it was the Washington Surgi-Clinic.

The nine defendants were charged with engaging in a conspiracy to prevent the clinic from providing reproductive health services and to prevent patients from receiving those services, prosecutors said.

They were also charged with violating the Freedom of Access to Clinic Entrances Act, a 1994 law that makes it a crime to threaten, obstruct or injure a person seeking access to a reproductive health clinic or to damage clinic property.

Attorney General Merrick B. Garland had signaled in September that the Justice Department would use the FACE Act to protect the constitutional right to abortion, days after a Texas law enacting a near-complete ban on the procedure went into effect.

If convicted, the defendants would each face up to 11 years in prison, three years of supervised release and fines of $350,000, prosecutors said.

Progressive Anti-Abortion Uprising seeks to mobilize anti-abortion activists for “direct action,” according to its website.

After the charges were announced on Wednesday, Ms. Bukovinac said, “Rescuers like Lauren and the other eight defendants are inspiring a whole new generation of leaders and activists to overcome their fears of sanctions and to take heroic direct action on behalf of the unborn.”

Ms. Handy founded a group called Mercy Missions, according to a 2017 report by EWTN, a Catholic television network, which said she had an out-of-control lifestyle before friends brought her to pray outside an abortion clinic.

She said she knew she could “no longer have a normal life knowing that babies were being systematically killed.”

She dropped out of college and started working in the anti-abortion movement full time and eventually converted to Catholicism, EWTN reported. She described handing out fliers outside abortion clinics and seeking to persuade women not to go inside. She said she had been arrested five times.

“It’s really humbling to know God has used me in that way,” Ms. Handy told the network.