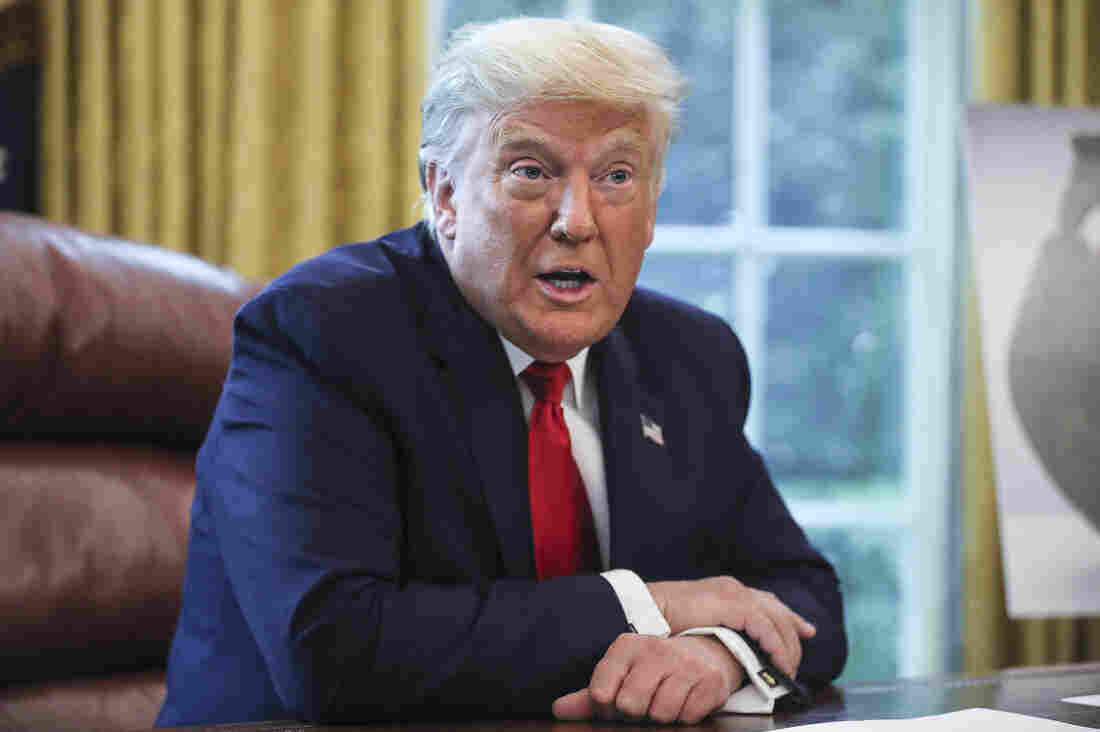 President Trump, pictured in the Oval Office on Thursday, maintains a lead over Democratic presidential nominee Joe Biden on the economy, but is behind on handling of the coronavirus pandemic in a new NPR/PBS NewsHour/Marist poll. Pool/Getty Images hide caption 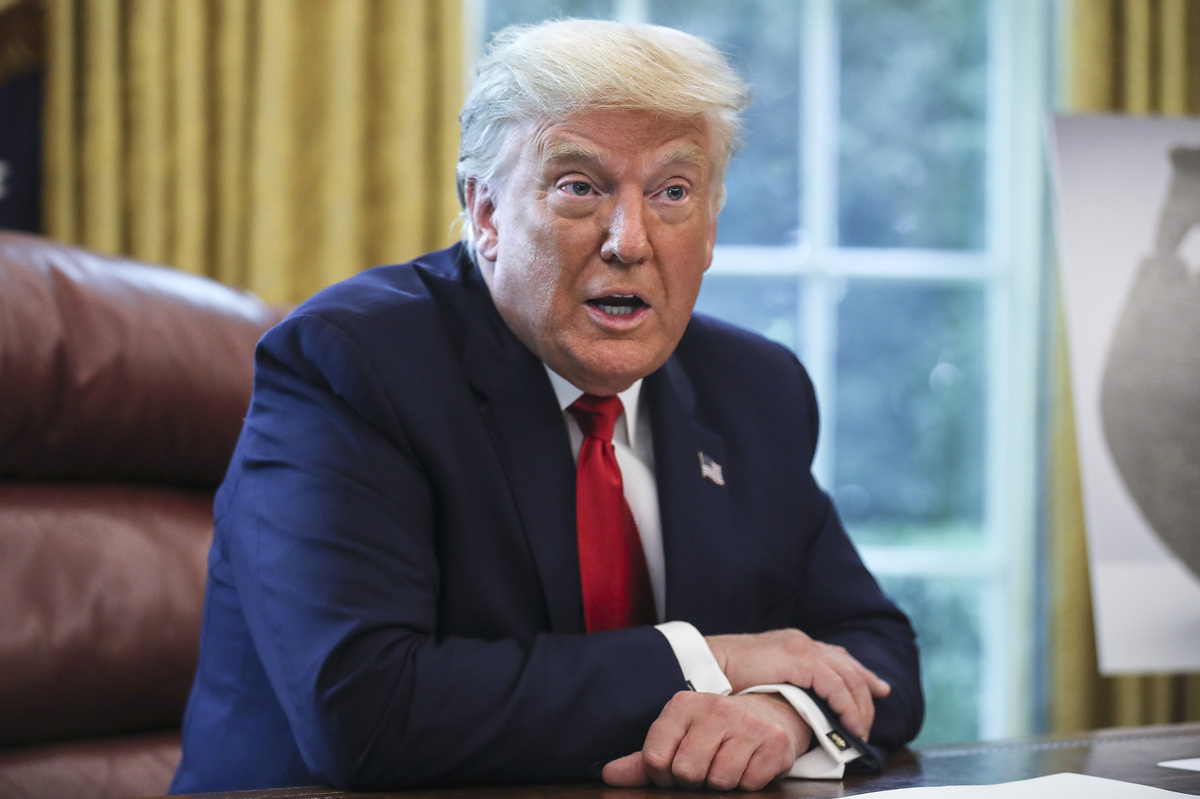 President Trump, pictured in the Oval Office on Thursday, maintains a lead over Democratic presidential nominee Joe Biden on the economy, but is behind on handling of the coronavirus pandemic in a new NPR/PBS NewsHour/Marist poll.

Weighing the president down in his reelection bid is his handling of the coronavirus pandemic and race relations, according to the latest NPR/PBS NewsHour/Marist poll.

More than half of Americans — 56% — disapprove of the job President Trump has done handling the pandemic.

The president continues, however, to have an advantage on the economy. Americans approve of the job he’s doing on the economy, 49% to 45%, despite the millions of jobs lost during the pandemic.

And likely voters say they prefer Trump over Biden to handle the economy, 50% to 46%. That’s partially why the president’s campaign is focusing a new round of fall advertising on the economy.

Here’s a breakdown of where American adults stand on key issues as voting season begins around the country, from the environment to the pandemic and election security, according to the poll:

On the issues, the parties have very different priorities.

But looking at the numbers by party shows the two sides living in very different universes.

For Democratic likely voters, amid wildfires in the West and hurricane season, climate change has taken over the top spot (22%), followed by the coronavirus (18%), health care (15%), the economy (10%) and race relations (9%).

Before the 2018 election, health care was the clear top issue for Democrats, followed by climate change and immigration.

For Republican likely voters, in this poll, it was the economy (35%) that was head-and-shoulders above any issue, followed by abortion (14%), crime and guns (both 7%), and the coronavirus and jobs (both 5%).

In a sharp reversal from 2018, just 2% of likely voters in this poll said immigration was the top issue. Just ahead of the 2018 election, as Trump called for a shutdown of the southern border, immigration was tied for second on the issue priority list behind the economy/jobs and health care.

Confidence in a potential vaccine has gotten worse.

Americans say public health experts and state and local governments are still their most trusted sources of information on the coronavirus, and just a third say they can trust what they hear from President Trump, but the president’s messaging against some of these officials — in this election year — seems to have resonated with his base.

Trust in both public health experts and state and local officials has declined 15 points since March. And it’s coming, again, from Republicans.

Overall, 69% of Americans said they have trust in public health experts, down from 84% in March and 75% in August. But consider just since last month, among Republicans that trust has dropped from 62% to 51%.

A majority (57%) of Americans said they trust what they’re hearing from state and local governments, but that’s down from 72% in March and 62% in August. Again, the shift is attributable to Republicans, who declined 8 points in the last month, from 51% to 43%.

Not rating much higher than President Trump in terms of trust on the pandemic is the news media at 38%.

Americans are pretty pessimistic that things will be back to normal any time soon — 69% think it’s going to be six months or longer. For context, back in May, 65% said it would be at least six months, and that was four months ago.

There has been a continued downward trend in support of the protests against police action as it relates to George Floyd in Minneapolis and Jacob Blake in Kenosha, Wis.

In June, 62% said the protests were mostly legitimate as opposed to mostly people acting unlawfully. But in August, that dropped to 53%, and now, Americans are split, 48% to 45%.

There’s a stark divide by age. Fifty-nine percent of Millennial and Gen Z voters (ages 18-39) say they think the protests are mostly legitimate, while slight majorities of every other age group disagree.

And while a majority of Americans overall (54%) still say they have a favorable impression of the Black Lives Matter movement, there’s been an uptick in those saying they have an unfavorable one, going from 34% negative last month to 40% now.

There, the negative opinions mostly come from Republicans, 83% of whom say they have an unfavorable impression of the movement, compared to 89% of Democrats and 59% of independents, who say the opposite.

Among Black voters, 78% have a favorable impression, as do 66% of Latinos.

Most Americans (53%) say the U.S. is either very prepared or prepared to keep November’s election safe and secure.

By a 69%-to-20% margin, national adults are confident their state and local governments will run a fair election.

Americans are more split on whether the U.S. Postal Service will deliver election-related material in a timely manner — 52% express confidence, while 46% express doubt.

By a 51%-to-38% margin, Americans think President Trump is encouraging election interference as opposed to making it safer.

By a 50%-to-37% margin, likely voters trust that the election results will be accurate — even if their candidate loses. And, perhaps surprisingly, there is little difference by party on this question.

About a third (35%) of likely voters say they plan to vote by mail or absentee. Almost half (48%) say they will vote in person.

There’s a big split by party on this — two-thirds of likely Trump voters say they will vote in person, while just over a third (35%) of Biden backers say so.

Almost half of Biden supporters (46%) say they plan to vote by mail.

So when interpreting election results, understand that Trump is set to dominate voting happening on Election Day, but that doesn’t take into consideration votes by mail and early voting, which draw a substantial portion of the voting population.