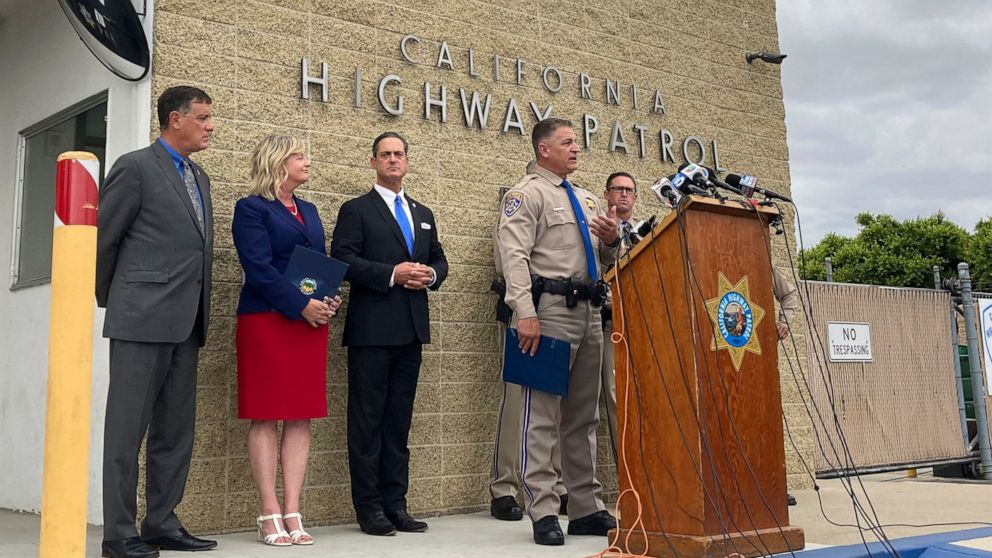 SANTA ANA, Calif. — A Southern California couple have been arrested for a road rage shooting that killed a 6-year-old boy last month on a freeway, authorities said Monday just hours after the child’s burial.

A gun and a car believed to have been used in the killing were found elsewhere, he said, but declined to provide details of the investigation or arrest.

The CHP initially announced the arrests on Sunday.

Aiden Leos was fatally shot in the abdomen on May 21 while seated in the back seat of a car driven by his mother, Joanna Cloonan, as she was taking him to kindergarten.

According to accounts from the mother and witnesses who stopped to help her, another car cut her off and she responded with a hand gesture and the car slipped in behind her and someone inside fired a shot through the rear of her car.

The bullet went through the trunk and the boy’s booster seat into his back. He died at a hospital.

The boy was buried on Monday in a private family ceremony.

At an open-casket memorial service on Saturday, he was remembered as a child with a vocabulary beyond his years who exuded warmth and tenderness. Cloonan said her son had given the family joy and purpose in life.

“I want nothing more than to find justice, though it won’t bring you back into my arms. My precious son had his life ripped away for absolutely no reason,” Cloonan said.

At least $500,000 in rewards had been offered from all around the country for information leading to an arrest in the case, authorities said.

“We had hundreds of tips from the public, it was extremely helpful,” Goodbrand said, declining to discuss the reward money.

The car, which the CHP described as a white Volkswagen Golf SportWagen, was relatively rare and that helped investigators examining surveillance footage, Goodbrand said.

The suspects are a boyfriend and girlfriend who live together, with Lee believed to be the driver and Eriz the front-seat passenger and shooter, said county District Attorney Todd Spitzer, who held up a photograph of Aiden as he spoke at the news conference.

They were scheduled to be arraigned Tuesday, although Orange County prosecutors were still evaluating what charges could be filed, which may be different for the driver and passenger, Spitzer said.

They were being jailed on $1 million bail. It wasn’t immediately known whether they had attorneys to speak for them.

Spitzer said charges being considered included murder “for doing a reckless act” that results in death and shooting into an occupied vehicle, which carries a possible sentence of seven years in state prison but with sentencing enhancements could bring 25 years to life.

Spitzer said the little boy killed doing what so many of us do every day — ride on the freeways — gripped the county of 3 million people.

“It’s because it could have happened to any one of us,” he said.

“We’ve all gotten upset at other motorists, other motorists have been upset at us,” the DA said. “I’ve thrown some gestures about myself. But it’s never come to a situation of violence and certainly not in my realm or your realm to the loss of a life.”

He noted that boy was buried by the family within hours of the news conference.

“I do want to promise today, when Aiden was put below ground, that we will get justice for him,” Spitzer said. “We have to promise him that.”